Game idea, is it right for Ares

Hi all, I’m a biology professor with an interest in games and gamification. I have an idea for a story based teaching tool that is basically an engine for case studies. I want players (students) to be introduces to a case and then be able to order various tests or treatments, receive feedback as the case progresses, and then make more decisions. I would want these cases to occur semi-randomly (with harder cases as they progress). Certain patients should be able to return with complications or new problems so the student builds a relationship with them. I would also like there to be a simple, less story based “quizzing” option where the player can build up points by demonstrating proficiency in a subject, reading test results, etc. Players should be able to take notes about particular cases for when patients come back. Ideally, myself or someone with an “instructor” profile should be able to look at scores so it could be used in a classroom setting.

I have an idea for a frame narrative where they are working at an interdimensional hospital so they can be exposed to diseases from all over the place and different times (possibly even study “alien” diseases). I would like there to be subplots involving hospital politics, romance, interpersonal conflict, etc. so there would need to be some way to track progress in various storylines occurring simultaneously.

I haven’t really played a MUSH before (though I’ve known about them for a while). Is this the sort of thing that could be done using AresMUSH?

Could you do it with Ares? Possibly, but what you’re describing sounds like it would require an immense amount of custom coding.

The core ‘vehicle’ for interaction in Ares is just a narrative scene where players (as their characters) write a story cooperatively. 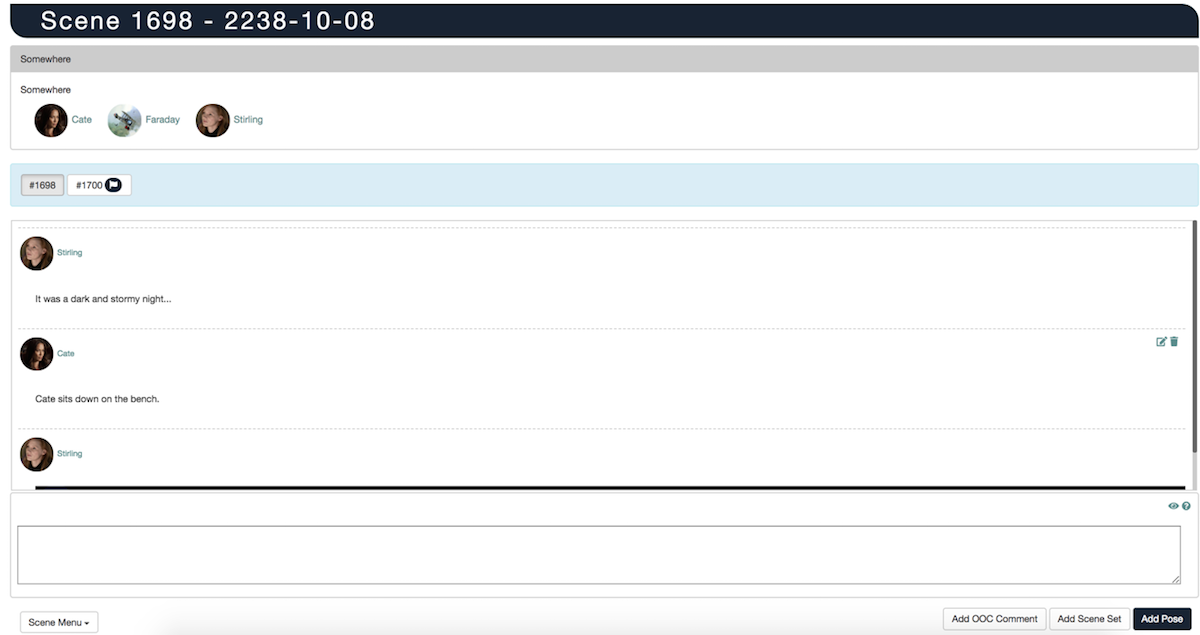 So from a narrative perspective you could totally do something like: “In this scene, Dr. Smith and Dr. Jones argue over the treatment of the alien flu victim”. However, everything related to the cases themselves - the generation, the levels, the patient persistence, the quizzes - would have to be something you coded from scratch. Figuring out how it interacted with the scene system would be challenging.

Also, there are a lot of components of the game that you probably don’t need at all for your audience of classroom students. Mail, chat, wiki, pre-built locations, character creation and dice rolling, etc. Your students are probably also more inclined to use web than MUSH client software, so that’s another piece of baggage that doesn’t really fit.

So given how much you would have to build from scratch and how little of the existing architecture you actually need, it seems like a custom web application might be a better fit for your needs than Ares.

I’m a bit late to the party here, I would say in order to understand it you really need to visit a couple of the Ares games sites that are fairly active. Crystal Springs and Keys would be good places to start probably.

Grabbing a roster character and playing a little bit (Or just looking around, ask staff, they’ll be friendly!). I would use the web portal as that’s probably what your students would use. The Log system is pretty robust and could be used for notes and such and even support multiple people’s notes and working togethre. They can be either private or public. And using the web portal it’s basically a thing that is easy to collaborate with across multiple different people/players.

Unlike a traditional telnet based mu, Ares offers a portal into different scenes that can be done over many days concurrently. The best way to see this is to jump in. Those that are not used to mu* code find that they can tackle it better than using somewhat archaic commands we’ve used for 20+ years. Thinks like pose, say, ooc, etc. For newcomers, the web portal through Ares is a much better introduction.

You can have bbs-style Forums, logs, which usually are rp scenes but you could flip those for your purposes, etc.